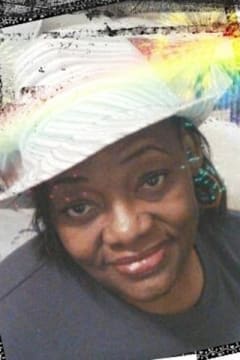 Dorothy Jean Johnson Jones was born on August 29, 1944 in Florence, South Carolina to the late Roosevelt and Marie Johnson. She accepted her new assignment on Monday, October 5, 2020 at the tender age of 76, at McLeod Regional Medical Center.

Dorothy suffered from epilepsy at a very young age. However, she never allowed her illness to overtake her. She attended Public Schools in Florence, South Carolina and proceeded to live a normal adolescent and teen life. She later moved to Newark, New Jersey. It was there she met the love of her life, the late Johnnie Wayne Jones.

Upon becoming an adult, she worked at several Nursing Facilities and a Daycare. Sunshine Day Care was her favorite job of them all because she always loved children.

Dorothy will always be remembered for her kind and giving heart, compassionate hugs and kisses, and generous prayers. When it comes to Dot, she has never met a stranger and she was a social butterfly. She was always willing to lend a hand and help in any adversity of others. Dot was the ‘Mother’ of North Wilson Street. She had an open-door policy where anyone could come over for whatever, whenever and, however.

She was not a judgmental person. She truly believed in judge not and be not judged, condemn not and be not condemned. These beliefs instilled in her at an early age led her to become a Pastor. She was a very motivating, encouraging teacher of the bible. She believed if you do right by others God will do right by you.

Furthermore, although she was kind and sweet, she loved to show her divine personality. She was always telling jokes, laughing, and having fun. She loved to play fight, eat orange slices, bit-o-honey, and sour bubble gum. She loved giving candy to the children at the church but never too much because she had to keep her stash. She was passionate about cooking and feeding people. Overall, she was a joy to have met and a pleasure to be around.

Please keep the family of Dorothy Jean Jones in your thoughts and prayers.

Send flowers to the service of Dorothy Jones

To order memorial trees or send flowers to the family in memory of Dorothy Jones , please visit our flower store.