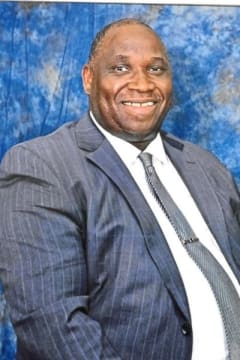 Brother Jeremiah Justin Redding was born on October 28, 1964. He was the son of the late Brother Robert Redding, Jr. and Sister Jannie M. Redding of Florence, South Carolina. He departed this life at the McLeod Regional Medical Center in Florence on May 9, 2020.

Jeremiah will be lovingly remembered by his family and loved ones, his church members and the community of those he served during his lifetime.

He was a graduate of South Florence High School Class of 1982.

He married Cynthia McMillan in February of 1988 and to this union, two sons were born; Jeremiah Justin and Jeremiah Joshua.

Church Life and Work: He was a member of The Church in the Lord Jesus Christ of the Apostles’ Doctrine, Inc., and was baptized in the name of Jesus Christ and received the gift of the Holy Ghost. He loved the church. Jeremiah often spoke of how he first came into The Church in the Lord Jesus Christ when he was in his early teens, and his brother Sam (who affectionately called him Gerome) listened faithfully to the Whole Truth Radio Broadcast. He decided to come to the services one Sunday, and had to walk there from his home because he did not have a driver’s license and no transportation. He got to the church in Florence and they had finished the services there. He met Bishop Hunter and let him know that he was disappointed that church was over. He recalls that Bishop Hunter told him there was another service and he rode with him to the next service on that afternoon. Thus, he continued to ride on Sundays to our services with Bishop and Sister Lenora Hunter for some time. He started arriving early to wash the Bishop’s car each Sunday morning before service. Then he started to wash and clean the other church vehicles. He also started cutting grass at the Hartsville and Florence churches, as well as the White House yards in Oates. He cleaned the baptismal pool at Headquarters and refilled it for many years as well. He did this as a duty in the work of the Lord without any monetary compensation. He recalls that when he had graduated high school, he was always planning to further his education by studying Engineering and mentioned this to the Bishop that he needed to start a career. Bishop Hunter said to him to look at and consider what he was already doing, his career was right before his eyes, and he was already doing it.

Business Career: Thus, he started Nu-Look Car Wash with his brother Sam detailing cars on Palmetto Street in Florence in (1983-1985). They later moved to the Irby Street location (1990-2000). This idea started a repeat of car detailing business in many towns and locations. The Lord blessed and his business grew. Sam recalls that they started out detailing cars and was then asked to do small jobs of helping people to haul and move things and thus Redding Moving Systems began. He also recalls that Jeremiah was a salesman, indeed. From day one he could meet people and convince them to let him do their cars and so often they would trust him and give him their keys without really knowing him. Redding Moving Systems grew to include tractor/trailer as well as three other trucks and vans with 9 employees which includes moving, packing, unpacking, and transportation. Their working range is from Chicago to New York to Florida, but have also done jobs in California, Montana, New Mexico and other states in between.

His fellow members recall how he helped those in need; the widows and the elderly and well as the children were fond of him. He visited those in hospitals as well as their family members from all over. He was “Cousin Jerry” to many of his family, a good father, good husband, his son recalls being taught many things for later in life. He loved driving on trips and never missed an Eastern Tour since he started in the church. He could always be depended on to be present at a church function, no matter where it was scheduled. He was a great driver and saw to it that those who travelled with him experienced the best. He loved air travelling and First-Class Seats, good restaurants and good church services.

He was a traveler, had no fear of flying (and convincing others to fly as well) often taking trips with his wife and family and enjoyed family gatherings. He had a special love for Alabama church and Sister Diane Flood and her family, travelling there often for many years and felt like his second home. The Saints enjoyed travelling there with him.

Those who preceded him in death were his parents: Brother Robert and Sister Jannie Redding, and two sisters: Mary Frances and Shirley Redding.

He leaves to cherish: His loving wife of the home, Cynthia Redding. He also leaves two sons with special friends whom he called “His Girls”: Jeremiah Justin Redding (Charity) and Jeremiah Joshua Redding (Brianna).

He leaves also a host of nieces, nephews, other relatives and friends, including a large church family.

Please keep the family of Jeremiah Redding in your thoughts and prayers.

Send flowers to the service of Jeremiah Redding, Sr.

To order memorial trees or send flowers to the family in memory of Jeremiah Redding, Sr., please visit our flower store.