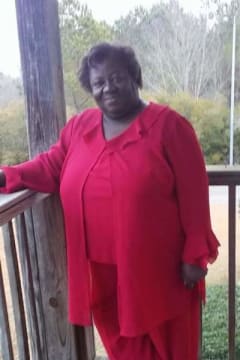 Mrs. Joretta Josephine McLeod was born on July 21, 1957 in Hartsville, South Carolina to the late George Gardner Jr. and the late Hattie Mae McLeod. Joretta was born 5 minutes older than her twin sister Loretta, but nonetheless, they were very, very close. She was educated along side her twin sister and both graduated from Butler High School on May 30, 1975.

After high school, motherhood hit Joretta at an early age. On April 25, 1976, her first daughter Christina was born. It was then that she had to make an instant change now that she became a mom. Joretta attended evening classes at Florence-Darlington Technical College in Florence, South Carolina where she obtained her certificate in Certified Nursing Assistant. From there, Joretta started working at Thad E. Saleeby Center for 16 years. During her time there, she became a mom again to a second daughter, Anna on June 18, 1988. And at that point, she said, “She was done having kids!” From there, Joretta have worked at other nursing home facilities as well as a hospital. She has worked at Morrell Nursing Home for 2 years, Medford Nursing Home for 1-year, Methodist Manor for 1-year, Presbyterian Nursing Home for 2 years, Sterling House now Elmcroft Nursing Home for 6 months, Home Health Inc now McLeod Home Heath Inc. for 6 years and finally settling her roots in her employment at Carolina Pines Regional Medical Center for 6 years. Whew! Joretta was a working woman!

Although she was Joretta was a twin, but people often get them confused with her twin Sister, Loretta. The only way to tell them apart was that Loretta would smile and say, “Hello”, while Joretta would simply just cuss you out, but in good and funny way. That was her way of letting everyone know who she was by her words. And Joretta had a way with some words. One thing about Joretta she didn’t bite her tongue to anybody and cuss you out like she was a sailor in the Navy. But her way of thinking was something you couldn’t put a finger on. She was more of an analytical thinker and the way, she told you something, she would have sat there and made you think from an angle that another person would have never thought of an answer from that perspective. Now, that was Joretta. She was the oldest twin, but she was a cussing thinker. A fun fact about Ms. McLeod that back in 1993, she and her twin sister found out they were third cousins to the late cousin Dr. Mary Jane McLeod-Bethune. When she found out about this, she was shocked! And from this information, she and Loretta took a special interest and finding out more information about their famous cousin.

Ms. McLeod was a member of Mount Calvary African Methodist Episcopal Church in Hartsville, South Carolina. She served on the Usher Board when she was much younger, and she was baptized at New Jerusalem Baptist Church in Hartsville, South Carolina. She was also a member of the Order of the Eastern Star Myrtle Chapter #56 where she was the Recording Secretary. Here hobbies were crocheting, sewing on the sewing machine, reading novels mostly from Brenda Jackson collection, watching her Lifetime and TLC channels while eating her favorite snack and her favorite drink, Little Debbie Devil Squares and her a cold 1- liter bottle of Pepsi, and listening to a lot of music, but her favorite song was “Forever, Forever” by Keiko Matsui.

Please keep the family of Jorette Josephine McLeod in your thoughts and prayers.

To order memorial trees or send flowers to the family in memory of Joretta McLeod , please visit our flower store.