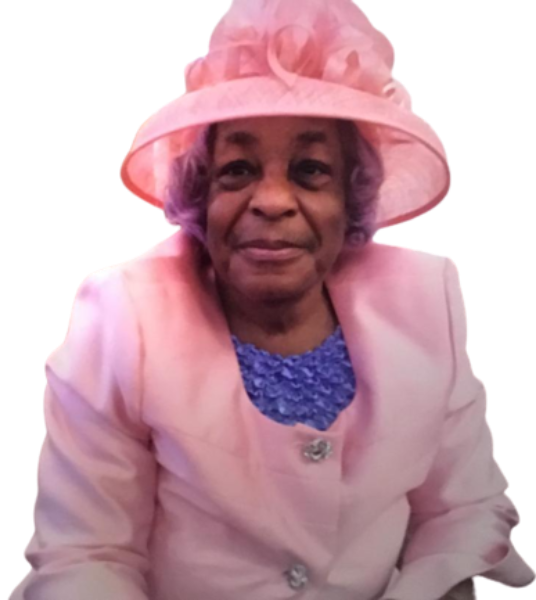 Mother Elsie Davis Redden, daughter of the late Samson and Flora Robinson Davis, was born in Florence County on September 12, 1940. She attended the Florence County public schools, including Wilson High School. At a very young age, she married Lucius Redden, Sr. on  November 12, 1955. At the time of his death, they were married for more than 61 years. From their union, five children were born, Delores, Dorothy, Lucius, Jr., Jeanette, and James. She departed this life on Thursday, March 31, 2022.

Because of her religious upbringing and strong belief in living Holy, she was baptized in Jesus’ Name and received the Gift of the Holy Ghost in 1961 at Bethel Apostolic Church under the leadership of the late Bishop U.I. McCall. She served faithfully in many capacities including being the finance secretary for more than 20 years, President of the usher’s department until her health failed a few years ago, adult ladies Sunday School teacher, secretary of the Senior Choir, member of the Dr. U.I. McCall’s Day Committee, President of the Missionary Department, member of the Senior Golden Years Organization  and so much more. She lived a life of commitment and dedication to her church and remained faithful until the end. She loved singing and praising the Lord, and fellowshipping with her brothers and sisters in Christ. She was an avid  bible scholar, but she also believed in  living a holy life. When there was a church meeting going on, she wanted to make sure she was there. Not only was church attendance at her local church important to her, but she also made sure she attended all of our national meetings whether Youth Jubilee, National Convention, Secretaries Workshop, Leadership Meeting, etc.  The distance did not matter; when it was time, she was ready to go!!! One of her passions was ushering at church locally and nationally. Oftentimes she would remind others that she has attended services and traveled as far south as Mobile, Alabama; Altamonte Springs, Florida; Knoxville, Tennessee; Yonkers, New York; Martinsville and Ridgeway, Virginia; Winston-Salem, North Carolina; and Goldsboro, North Carolina; and so many other places. Her ultimate joy was to be with the Saints. When it was time for conventions, she started shopping and getting prepared months ahead of time. She continued to remain faithful under the leadership of Bishop Harry Williams, and in 2004, he officially designated her as one of the Mothers of the church. She felt that this was such a great honor that was bestowed upon her. The Lord granted her a full life, and allowed her to enjoy many of the things she desired.

During her early years, she was employed by Dr. Clyde T. Padgett and his wife Betsy. She became like family to them helping to raise all of their children and some of their grands. In her honor, Dr. Edwin Padgett named one of his daughters Elsie. The family continued to remain in close contact with her even when her health began to decline.

Mother Redden’s family was so important to her, and she enjoyed being with them. She looked forward to the Davis and Redden family reunions to reunite and fellowship with family. Her children, grands, great grands, and great great-grandchildren were her pride and joy. She loved cooking Sunday dinners so all of them could be together. Even during her last days of life she wanted to make sure all of them were doing ok. We treasured her, and did all we could to make her life as comfortable as possible. She loved reading, especially the bible, cooking, shopping, and traveling. When possible, she wanted to be in attendance for  all graduations, weddings, birthday celebrations, and any other celebrations for her children, grands, great grandchildren, great great-grandchildren, and other family members.

The family will receive friends at 231 N. Lester Ave., Florence.

Due to COVID-19 precautions, please wear a mask.

Please keep the family of Mother Elsie Davis Redden in your thoughts and prayers.

To order memorial trees or send flowers to the family in memory of Mother Elsie Redden, please visit our flower store.