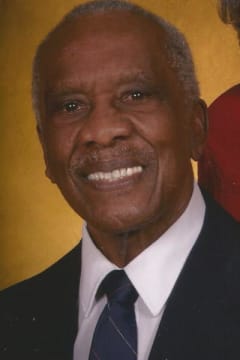 Preston Gunning was the third son of Roscoe and Hester Womack Gunning. He was born on May 27, 1927 and departed this life just five days after the passing of the love of his life, Jacqulin Taylor Gunning.

Preston was a very intelligent man blessed with a natural ability to lead which was evidenced throughout his life. He attended the public schools of Harrisburg, PA where he was also a standout athlete at William Penn High School. It was during those high school years that he met his beloved Jackie. Jackie brought much joy into Preston’s life when they got to know each other after the tragic death of his younger brother Calvin.

After high school Preston went to serve in the United States Army while Jackie remained in Pennsylvania to attend college. When Preston returned home, he astutely used the GI Bill to attend Cheyney State College wherein he majored in Education. Preston was a superior athlete at Cheyney and earned varsity letters with the Wolves in track, basketball, and football. Preston was such a stellar athlete that he was enshrined into the Cheyney State University Athletic Hall of Fame for Football and Track in the induction class of 1985.

Preston taught high school in Fredericksburg, VA for a few years, but he really made his mark in the field of education when he and Jackie moved with their two oldest children to Camden, NJ. In his stellar career as an educator, Preston taught industrial arts, served as a guidance counselor, and coached track and cross country. His track and cross-country teams won several awards including a Camden County Championship.

Preston, better known as “Pres”, was very active in the community and belonged to several service organizations, most notably, as a member of Kappa Alpha Psi, Fraternity, Inc. Pres was a 1949 initiate of the Lambda Chapter of Kappa Alpha Psi at Cheyney State and was a Charter Member of the Burlington Camden Alumni chapter. Pres also served with the Rotary Club and was recognized as a Paul Harris Fellow.

Recognizing his leadership acumen, Pres was promoted to serve in administration in the Camden schools and ultimately served as Camden Board of Education Assistant Superintendent for Finance, and Board Secretary, retiring in 1990. While in retirement, his leadership was so missed that he was asked to come back and serve as Acting Superintendent of the Camden Board of Education.

Not only was Pres a leader in the school system, but he was a leader in his church, the historic Kaighn Avenue Baptist Church of Camden, NJ. A devout Christian, Deacon Gunning served as Chairman of the Deacon’s ministry for over 30 years. Deacon Gunning sang on the Men’s Choir, attended the Men’s Sunday School Class, and was a sought-after speaker throughout New Jersey.

Deacon Preston Gunning was preceded in death by his loving and devoted wife of 71 years, Jacqulin, two sons Preston Jr., and Jeffrey, his parents, and his three brothers, Oscar, Heyward, and Calvin.

Please keep the family of Deacon Preston H. Gunning in your thoughts and prayers.

To order memorial trees or send flowers to the family in memory of Preston Gunning, please visit our flower store.