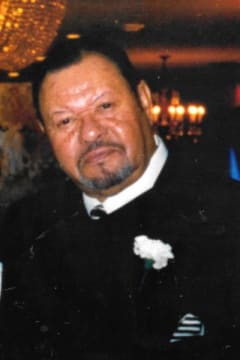 Deacon Samuel “Singing Sam” Orr, Jr., was born on October 31, 1931 to the late Samuel, Sr. and Estelle Orr in Pineland, South Carolina. He departed this life on Wednesday, September 16, 2020 in Darlington, South Carolina.

Samuel, known as “Sammy”, to his family and friends received his education in Clyo, Georgia where he lived with his grandfather, the late William Orr. He loved working side by side with his grandfather helping him plow the fields especially when he was allowed to guide his horse, Rosey. After the death of his grandfather in 1945, Samuel moved to Paterson, New Jersey to live with his sister, Marie Goodman.

In 1947, he met the love of his life Lucille “Cile” Boyd and on July 24, 1949 they were united in holy matrimony. From that union 11 children were born: Christine, Mary Ann, Kelvin, Debra, Donna, Victor, Beverly, Gail, Leslie, Kimberly, and Byron. With reverence to God, they sought to rear their children in the training and instruction of the Lord and always stressed to them the importance of having a relationship with God.

Samuel’s journey of faith in Jesus Christ began at Saint Luke Baptist Church in Paterson, New Jersey where he was baptized and served in various ministries including the Male Chorus and Mass Choir. He later answered the call and was ordained as a Deacon where he served for more than 20 years.

Samuel was a devoted gospel singer and at a young age he began singing with the gospel group, Royal Harmony. Shortly thereafter, he formed his own quartet group called the Zion Seekers and they shared the gospel message through songs for more than twenty years. Samuel later recorded an album entitled, “Snatch-A-Loose from the Devil” with The Mighty Stars of Harmony and enjoyed a career with various quartet groups for more than 50 years.

In 1997, Samuel and Lucille relocated to their newly built home in Darlington, South Carolina. In their prayerful search for a church home, they were led to Wayside Chapel Baptist Church in Florence, South Carolina, where Samuel continued his service and love for singing in various choirs as well as serving on the Deacon Board.

Samuel always enjoyed spending time with his family and he thoroughly loved his wife, Cile’s cooking, especially her fried chicken. Samuel was known to enjoy a good meal as long as it was seasoned well! Samuel also enjoyed watching a good baseball game with his favorite teams, the NY Yankees, and the Atlanta Braves.

Please keep the family of Deacon Samuel Orr in your thoughts and prayers.

Send flowers to the service of Samuel Orr, Jr.

To order memorial trees or send flowers to the family in memory of Samuel Orr, Jr., please visit our flower store.